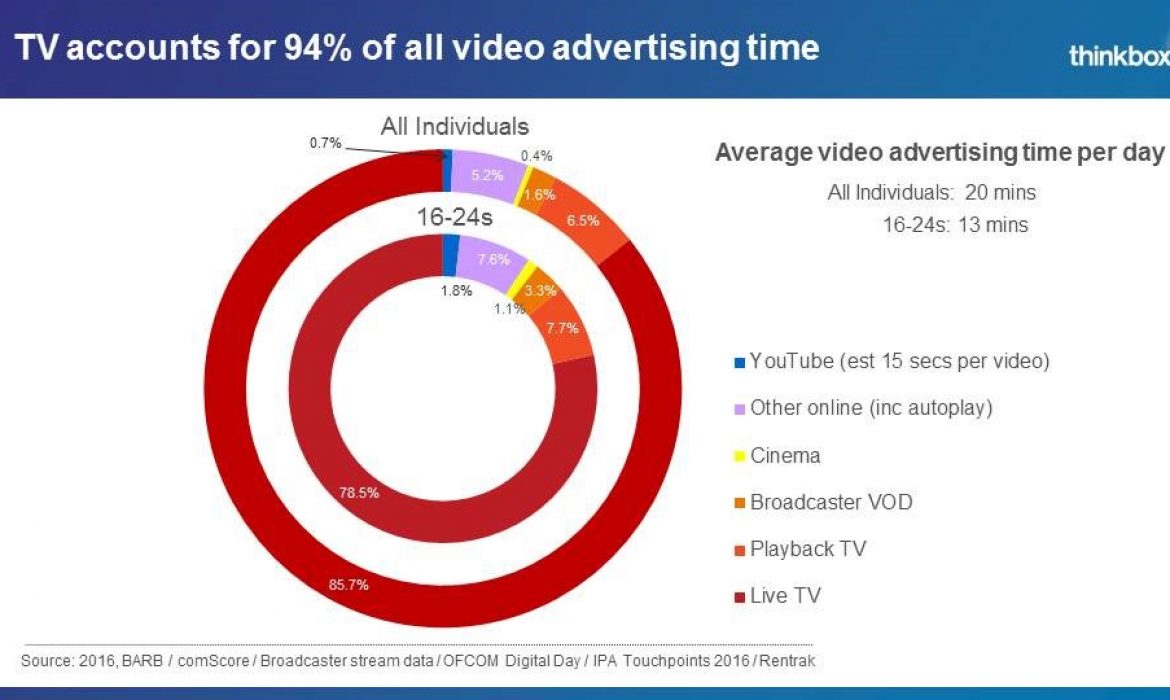 TV is buoyant in a Digital World

We thought we would share with you some extremely interesting information that was published this week regarding the viewing figures of TV advertising and online video.

A recent report by Thinkbox, TV’s independent marketing body, stated that TV accounted for 93.8% of video ads viewed in the UK during 2016, far more than YouTube and online video as a whole.

From the study, it found the average person in the UK watched 20 minutes of video advertising a day last year. TV – either live, playback or on a broadcaster’s VOD service – accounted for 93.8% (18 minutes, 53 seconds) of this time spent daily, compared with 94.4% in 2015. YouTube, on the flip side, hosted 0.7% of the video advertising that was viewed. While this was up from 0.5% posted in 2015, it shows how tough YouTube has found breaking into the TV ad market.

In the Mostly Media office we’ve long been convinced that TV is not dead despite the growing number of nay-sayers out there, the results some of our clients are currently achieving are quite simply staggering, and this research goes someway to proving just why.

YouTube remains highly popular with 16-24’s although 0.2% growth in a year is not earth shattering despite the public perception. The reason for the popularity within this younger market we see as two-fold. Firstly because of the relevant content and secondly due to the way the content is delivered, in bite size chunks.  This is a generation with short attention spans who flit between apps and devices more freely than ever before.   However, YouTube are yet to find a model where people engage with their video ads yet, hence the great ‘Ad Skipping’ conundrum that they face.

It is our view that broadcaster video, be that traditional TV or VOD has tacit approval for advertising consumption from viewers.   The ‘Great Christmas TV Ad Race’ shows the affection the viewer has for ‘quality’ TV advertising.   This is highlighted strongly by the fact that only c.17% of ads are fast forwarded and that has been pretty static for the last 5 years.

Digital video consumers have grown up with ad blockers and skip buttons with the overriding consequence that the ad approval system seems to be very different online. Viewers don’t not think they ‘should’ or ‘need’ to see ads.   At Mostly Media we are not convinced that an ad launched and primarily run on digital platforms such as You Tube would currently have any hope of replicating the fame and success that the likes of John Lewis see at Christmas.

In a nutshell, viewers will follow content and the best content will deliver the biggest audiences over time; so if ITV, Channel 4 and SKY continue to make and broadcast high quality TV programmes that appeal to large audiences, TV will continue to provide the reliable advertising platform that it always has been.

In summary, The Thinkbox research shows, and we couldn’t agree more, that despite TV’s unfair reputation for being ‘old hat’ in the digital era that we live in, TV is buoyant in a digital world and continues to deliver exceptional results for advertisers.

Stu and the Mostly Media team.